A solution for the Apple ID password dialog phishing problem

That was a mouthful.

There has been renewed attention to the problem that any iOS app can present a password dialog that exactly mimics iOS’ native Apple ID password dialog.

I’m going to get right to the point.

My proposed solution: any password field created by an app would have a monochrome version of the app icon overlaid on top of it.

In contrast, the native iOS dialog would have a green padlock icon overlaid. 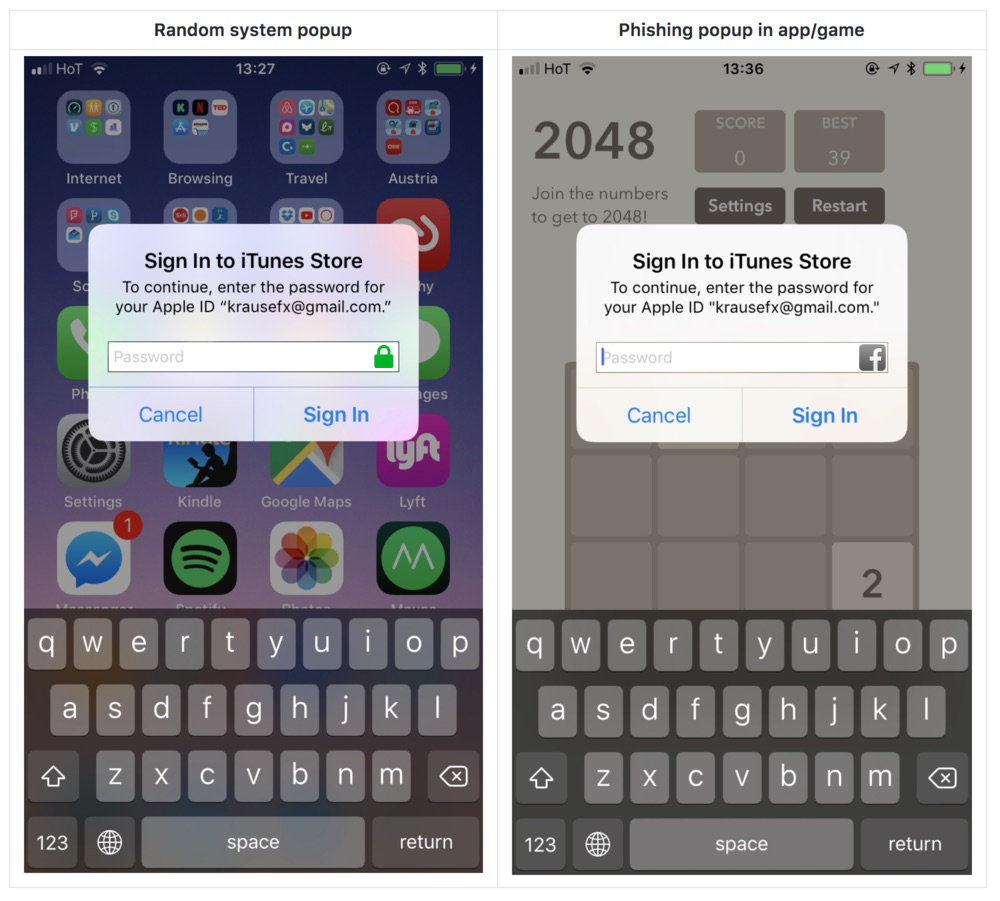 This ensures that the user can tell, with confidence, which app the password they’re typing will go to.

Why the monochrome/green distinction, you ask? Because some apps feature a padlock as part (or the entirety) of their app icon. [1]

Here are just a few examples I found with a very quick, non-thorough search: 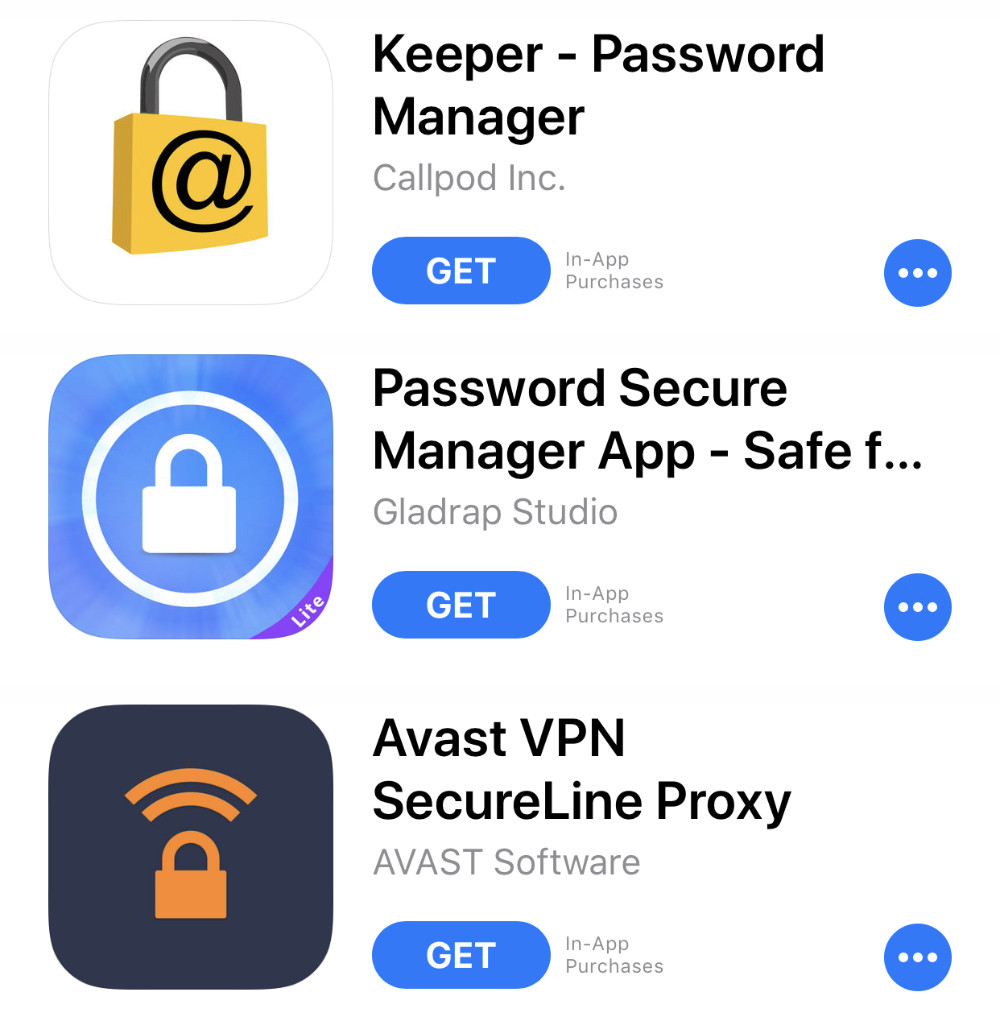 [1] This does pose a problem for the colorblind. I don’t (yet) know how to handle that.

Somehow, the most abstract and intangible attachments you have to people still seem to remain dependent on (or at least effected by) physical experiences — from experiences as trivial as colocation to more substantial ones.

The single most painful way to be disconnected from someone you love is, I think, having never shared a hug with them and, for one reason or another, having no hope of ever doing so.

Silly-sounding, yet so resonant that I can’t dismiss it.

The more we like something, the more likely it is to be unobtainable?

For example, maybe it’s not true that if you love someone a lot, it’s more likely for them to reject you.

Perhaps you love them a lot because they reject you.

Entity A sues entity B for having assaulted A.

A has demonstrably been assaulted by someone, but provides no further evidence that B was involved. A merely accuses B of having done it.

Should B have to defend themselves to remain considered innocent?

B should be able to refuse any particular form of cooperation or action on their part to “defend themselves.” They can do nothing and, still, be considered innocent.

Apparently, people don’t really mean it when they say that. That might even include you. Yep, you.

A has demonstrably been assaulted by someone, and provides evidence showing that B was, at one point, in the same room as A the day the assault occurred.

Assuming you answered “no” to the first scenario, you might answer...

With Apple Music, Apple is said to plan on sharing 71.5% of revenue with music owners in the U.S. (and a bit more internationally).

In most cases on iTunes, just over 70% of the purchase revenue goes to the music owner.

Sounds pretty damn close to me.

One iTunes user spends, on average, $12/year on music. This was estimated in 2013 — given that sales per account have been trending downwards, it’s safe to assume the $12 figure as being plenty close to the real average. That translates to ~$1/month.

In the U.S., Apple Music is $9.99/month. It’s different in other countries, but let’s ignore exchange rates (the ratios would cancel out) and use that figure: $10/month.

(If you end up believing that 1 cent makes any difference in the conclusion, ask for it later).

Some will now feel...

This is my extremely-well-thought-out, extensively-considered, non-satirical response to this Mediumrare post by Sady Doyle,[1] which is entitled “Age of Robots: How Marvel is Killing the Popcorn Movie”.

[1] I don’t mean to imply that you should recognize the name (nor that you shouldn’t; I don’t know). She does appear to be very Google-able, but that might be because of the somewhat-unusual first name.

This is the part where I say something overly-sensational to get readers thinking they’ve stumbled upon something radical.

I think Sady didn’t enjoy the Avengers: Age of Ultron movie. Although online blogging/publishing/Mediuming has an admittedly-low barrier to entry, one still has to guess Sady has more reason and motivation to write up her argument than merely...

Designers should understand the set of baseline skills and knowledge their target users are expected to have. The interface should be constructed accordingly. For the principles in these discussions, the default skill level we assume is the computer literacy of an average United States 4th grader.

1: Active items should be self-revelatory.

Examples: a “Submit Form” button, “Yes”/“No” radio buttons, a door with an “EXIT” sign over it, elevator buttons. These examples suggest that communicating roles and function often requires either...

There should be a better way

Arbitrariness in design has been stressing me.

It is so difficult to ignore how much of it there is, especially when you observe people with less patience and some impairments (vision, motor accuracy, etc.) try to interact with some objects. Above: the object I’ve most recently watched people fight with.

There’s so much bad design that we’ve come accustomed to compromises— where we have to put special effort to get things to do what we want.

It has become the norm to wrap our intuition around paradigms that feel alien.

We think those who get frustrated with objects are ignorant or inexperienced, while, in fact, they’re not. They just aren’t insensitive to the crappiness; we’ve developed a “status quo” presumption attached to many objects we interact with.